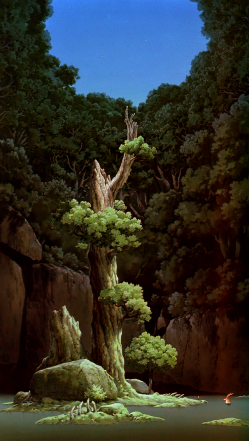 The next few films in this list are here because, well, there isn’t any other place for them. They didn’t make me cry, and they didn’t really suck me head over heels into the story. Princess Mononoke (1997) is straightforward in its theme and message. While the main character, Ashitaka, is generally likeable, as is the secondary character San (Mononoke Hime), the story itself leaves a bigger impression, rather than the characters. The plot is very strong; the characters, not so much. This movie is probably the most graphic of his, what with limbs and heads getting blown off. For a Miyazaki film, I was really quite surprised.

The graphic nature is to reinforce the theme of the senseless violence that ensues out of hatred and greed. I suppose. Though the scenery, the character design, the creatures, i.e. all the visuals, reflected the Miyazaki trademark, the story was dark and somber. The villains are really villainous and devious. The good guys have some internal struggles, but overall everyone was kind of on the flat side. And that’s pretty much why despite the impressive illustrations (this was Ghibli’s first film to use CG), this sort of fell towards the bottom of the list.

Side note: just because these films are towards the bottom of the list doesn’t mean that they’re not worth watching and rewatching. These are all great films! And strictly subjective. Obviously.

Anyway, Princess Mononoke is about a young warrior, Ashitaka. He defends his village from a strange boar possessed by a demon and thereby feels the need to discover how and why nature is being corrupted by hatred. However, the boar demon curses Ashitaka with impending death. So the warrior travels to the far west and eventually finds Eboshi and her industrial fortress of Irontown. They’re devastating the nearby flora and fauna in order to make weapons, and so Ashitaka makes his best attempts at befriending and helping San, a young lady with a special connection with nature. Conflict rises and in a final grand denouement, the demons of hatred are vanquished.

I wish Eboshi (and that sneaky accomplice of hers Jiko-bo/Jigo) got what they deserved. The internal changes of the villains are unsatisfying. How does one go from “Watch closely. This is how you kill a god” to ‘oh, I see now, I learned my lesson, sorry, I won’t do it again.’ And the theme of how human greed spawns hatred and destruction is saturated everywhere. Avatar’s James Cameron definitely took some pointers from Miyazaki’s story. For me, it was a bit too much.

Eboshi was something of a conundrum to me. She’s intelligent, she’s helpful, she’s a strong leader, she’s altruistic to her fellow human, all that, and yet she gets off on killing nature and making weapons of (mass) destruction. She’s the main reason why I couldn’t dig this movie. She deserved much more than some maiming at the end. When a villain is so villainous, a 180 degree change is very unsatisfying for me. Especially when all it took was a maiming for a change of heart? Eh.

Mononoke herself, I liked. She’s torn between her love of nature and her suppressed human attachment to Ashitaka, but she stays true to her calling which is to protect and preserve nature. And Ashitaka does the right thing. Always. So in that sense, the protagonists were very simple and easy to predict. But like I said, this is a plot-driven story, not character-driven. So you won’t really find lovable and endearing characters in this film. Well, I’m not exactly a movement-driven sort of person, so I didn’t find much to relate to here.

I did enjoy that Eboshi didn’t exactly get her way with the Forest god. The ensuing devastation following his beheading definitely put a smile on my face. Miyazaki’s way of pointing out the power of nature and how nature is and always will be stronger than humans was beautifully rendered. With cause comes effect, action comes reaction, and nature will only tolerate so much before it lashes back with its own emotions. The contrast between war and peace is so drastic in the film’s artwork, and he did a fantastic job portraying exactly that.

It’s a great adventure story, the graphics are beautiful, the kodama are hauntingly enchanting, and for all the rave reviews it got (outside of here), it’s worth the watch.

Comments, questions, disagreements, or just want to say something? Please do! Cancel reply

9 Reasons Why I Don’t Use Scrivener