Miyazaki retiring is like Walt Disney retiring: their corporation lives on, but you know that the original spirit won’t be there anymore. Sure, some Disney films are still magical and entertaining, but they just don’t possess that original charm and beauty. Out of Miyazaki’s eleven full-length films he wrote and directed, I’ve to-date only watched nine of them. And though my experience isn’t acutely comprehensive, I’ve watched each film at least 20-30 times on average.

That’s what happens when you have small children who like to watch a good film over and over for weeks months and years on end. Sometimes repetitively in a single day. Fortunately, Miyazaki’s films are the only ones that fail to irritate me when on repeat. It’s a wonderful thing when your kids enjoy your childhood movies just as much as you did at their age. And what makes these films even more enjoyable than when I last watched them in my single digits is watching them at an older age when you can appreciate the story in its full context. I’d like to think my kids are more exceptional than myself at their age and are actually paying attention to the story, for I only initially loved these movies for their visual appeal. But I was six years old, what did I know about forest spirits and having a sick mother in a hospital: I only watched the movies for Nekobasu and Totoro!

Sentiments aside, now as a storywriter, I truly appreciate the talents of Miyazaki’s storytelling, the skill with how he incorporates his themes, how lovable his characters are (or become), how he achieves mood and tone, and the overall beauty of his settings. His success in these aspects are partially due to: his themes are universal, his characters have just the right traits for anyone to relate with, and his settings are composites of real places (typically Japan or Europe).

While I originally concluded that his major themes have to do with coming-of-age, growing mature and taking responsibility for self and for the world around the character, a more in-depth study reveals that there are many more themes present in all his films than first thought. It helps to know that Miyazaki is anti-war and pays homage to Shintoism, having a healthy respect for nature. All his protagonists are proponents of peace. The visuals of his films accentuate the beauty and magnificence of nature (thanks to Kazuo Oga’s talents).

But getting back to themes and how Miyazaki achieves such grand storytelling accomplishments. Apart from Castle of Cagliostro, Porco Rosso, and The Wind Rises, here is a short list of themes I’ve taken note of.

As mentioned before, one of the most prevalent themes is abandoning childishness to be replaced by responsibility, appreciation, and maturity. These are most obvious in Kiki’s Delivery Service, Spirited Away, Howl’s Moving Castle, Arietty, and Ponyo.

Another powerful theme is having respect for nature and its immense power. These are most apparent in Tonari no Totoro, Princess Mononoke, Castle in the Sky, Ponyo, and Nausicaa.

Some of his stories are more thematic than others: ie, they are more character-based than plot-based. Sometimes his characters will fall short in order for the story, and perhaps I’m more forgiving than other critics (really, I’m not one to criticize), but aside from Ponyo herself (well that’s personal),

no one really fell flat. In lieu of Studio Ghibli’s stories, Tales from Earthsea was disappointing because unless one is familiar with the Earthsea stories like I am, the characters are basically just talking heads pitifully trying to garner the viewer’s sympathy. I doubt many of its viewers were aware of Tehanu and Sparrowhawk’s (Ged) backstory. Tales from Earthsea was strictly, in my eyes, a plot-based story.

The most powerful and effective themes obviously belong to his character-based stories, accomplished by Kiki, Chihiro, and Sophie. Yes, they are my top three (Totoro is pure unalterable affection, it’s a moot issue) so I will reference them more often than the others. 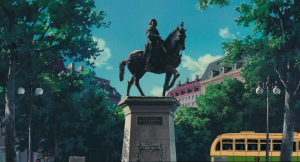 In further articles, I’m going to expound on his themes and how he achieves them in his stories by going through each of the films he’s written and directed by a most controversial way: a list of his “worst” to “best” stories. I hate to say worst but well, nobody’s perfect. And there is no such thing as worst when it comes to Miyazaki anyway.

One response to “Miyazaki’s Storytelling”

Comments, questions, disagreements, or just want to say something? Please do! Cancel reply

9 Reasons Why I Don’t Use Scrivener